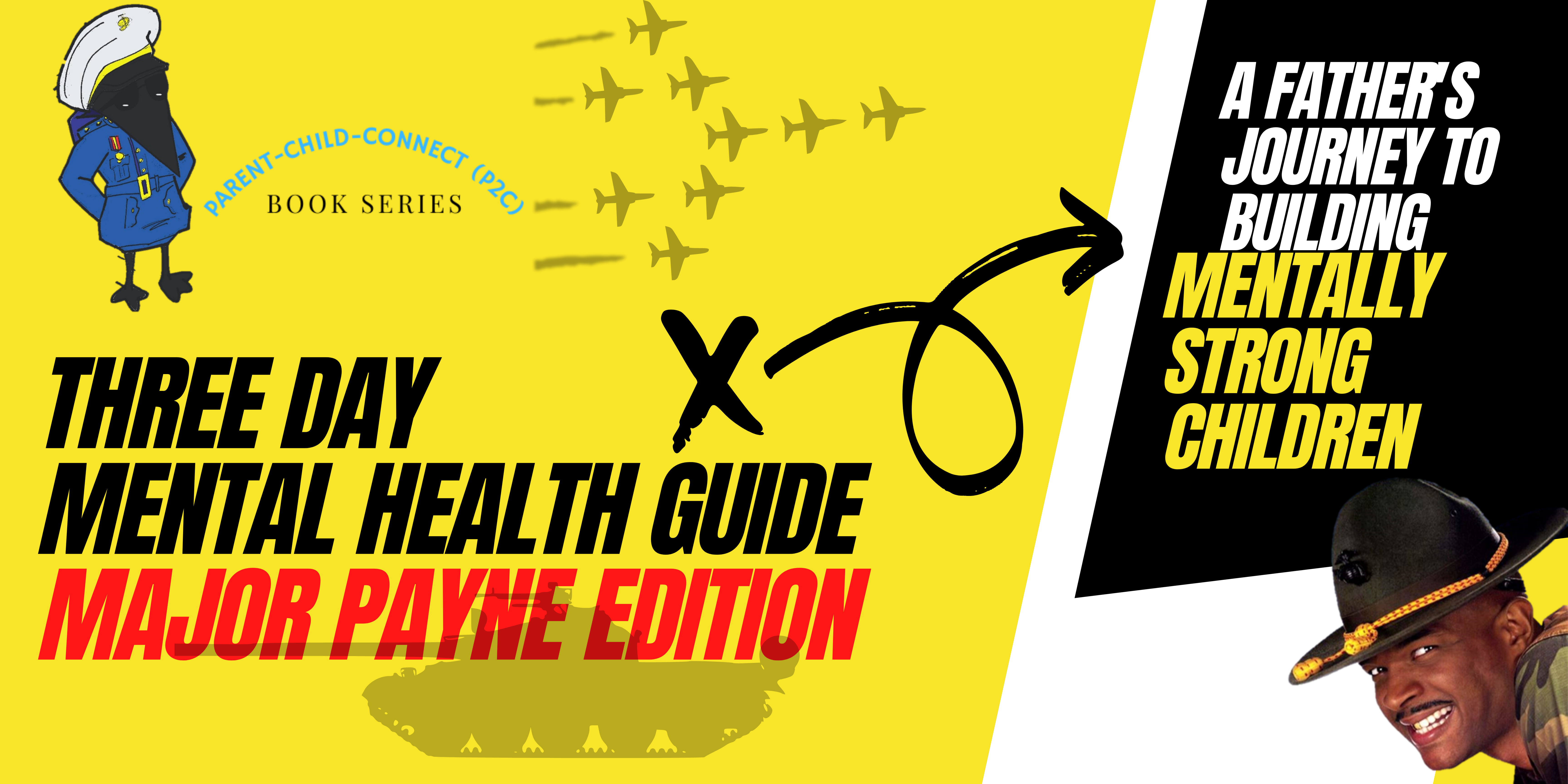 I made the “Three Day Mental Health Guide: Major Payne Edition” one of my first FREE downloadable resources! Go to https://parent-child-connect.com/free-resources to check it out!

Day One: A Tough Topic

Mental health is a tough topic of discussion in most homes and oftentimes met with negative comments. Those who deal with mental health are often shunned and ostracized.  I thought “finance” was a sensitive topic, but discussing mental health is like walking on thin ice. It is often seen as an untouchable, unspoken topic. My mental health journey started at an early age, and I have personally learned from my own journey. I felt as though I would be viewed as crazy or looney, require a lifetime medication prescription, and/or be locked in an asylum for the rest of my life. I was always afraid to face my mental health head on and be open with my parents about how I was feeling. Growing up in the church, we were always taught that negative thoughts were the devil and we should just attempt to pray them away and hope for the best. As I got older, I often felt my mind drift to darker places than the last time. I finally learned that prayer alone just wasn’t going to cut it.

What I have learned along this journey is to be open and honest with my family and –most importantly– my children. With our world crumbling right before their eyes, who knows what could be going through those little minds?  I dealt with my mental health in adolescence alone because I was too afraid to open up to my parents and older siblings, thinking they would think something was “wrong with me.”

I do not want that for my children. When they deal with their mental health, I want them to understand that IT’S OK and PERFECTLY NORMAL.  I want them to understand that their biggest hero and cheerleader, Daddy, has and continues to go through those feelings while on his own mental health journey. Those little boys will know that I am here to guide them through their journey and make sure that they are able to grow along the way.

I have learned to replace words like “struggling” and “coping” with words like “learning, growing, and progressing” when discussing my mental health journey. We all have our own journey, but it is imperative that we teach our children to navigate through this tough topic. How do we teach them? Let’s walk through this guide together!

“Shut up crybaby!” “Suck it up!” “Stop acting like a girl!” “You must be a wimp!” “Stop crying… real men don’t cry or show emotion!” “Toughen up!” “If you want sympathy, look in the dictionary between…” You know the rest. These sound familiar? In an attempt to teach our young people how to overcome adversity, these are some of the things we say. We should be developing what I like to call the three pillars of fortitude: physical toughness, spiritual toughness, and mental toughness; however, by constantly barraging our children with anything like the aforementioned clichés, we are inadvertently teaching our children to suppress pain/feelings while emotionally disconnecting from themselves and others.

🎥Watch this🎬: The Mask You Live In is a film worth watching that, “follows boys and young men as they struggle to stay true to themselves while negotiating America’s narrow definition of masculinity… [This film] ultimately illustrates how we, as a society, can raise a healthier generation of boys and young men.” –therepresentationproject.org

Did you catch the Major Payne quote above?? That is definitely one of my favorite movies! For those that have not seen it (spoilers loading…), Major Payne is a comedy film from the ninety’s that stars Daymon Wayans acting as Major Benson Winifred Payne–a nail eating, combat tested, United States Marine (Oorah!) that was honorably discharged after being passed [twice] for promotion. He later finds a job as a JROTC instructor and faces the tall task of turning a “…gaggle of maggots into a well-disciplined cadet unit” (his words, not mine). Fast forward to the end, the newly-cohesive unit wins the Virginia Military Games!

Now before you go purchase hand grenades to “train” your children, please understand that I am not endorsing Major Payne’s [hilarious] leadership model. He had A LOT to learn about raising/mentoring young people. The good news is after reading “The ABC’s Of Being A Positive Male Role Model,” Major Payne began to comprehend the importance of teaching young people to reconnect with their emotions. He understood that he had to “be sensitive to [their] needs” to reach their hearts.

Tomorrow, we will discuss how we can make the same tweaks in our leadership abilities as the infamous Major Payne! Stay tuned.

Boot camp 101: “Fall in” is a command that means, “take your place in a military formation.” In the Marine Corps, we “fall in” at the position of “attention.” Meaning you are attentive and ready to hear what’s next.

Since I have not located the book that triggered Major Payne’s transition from trained killer to effective mentor, I created the below ABCs Of Being a Positive Father and Role Model! Don’t worry… I’ll stop at “D.”

Always seek to inspire: this tip is a science and an art.

**Check this out: My youngest daughter literally jumped (fully clothed) into a kiddie pool as I was typing this section! So, I had an immediate opportunity to practice being patient. 🙃 I grabbed her hand, calmly told her, “you’re all wet; let’s go dry off,” and walked her inside. Po-si-tive *Major Payne voice **

**BONUS “C”: Celebrate!! My youngest was potty training when I wrote this. So I took a quick break to celebrate with a silly jingle and dance I made up, “Eni went poopy in the poooottty!” *Clap *Clap (repeat). Positive reinforcement goes a long way!**

Do not be afraid to cry openly!

That’s it! Just like that, you now have all the tools you need to be successful. Now throw on your best Major Payne voice and go lead your home to a stronger mental health.

Note for my readers: If you or anyone you know is having suicidal thoughts, please call the National Suicide Prevention Lifeline at 1-800-273-TALK (8255).