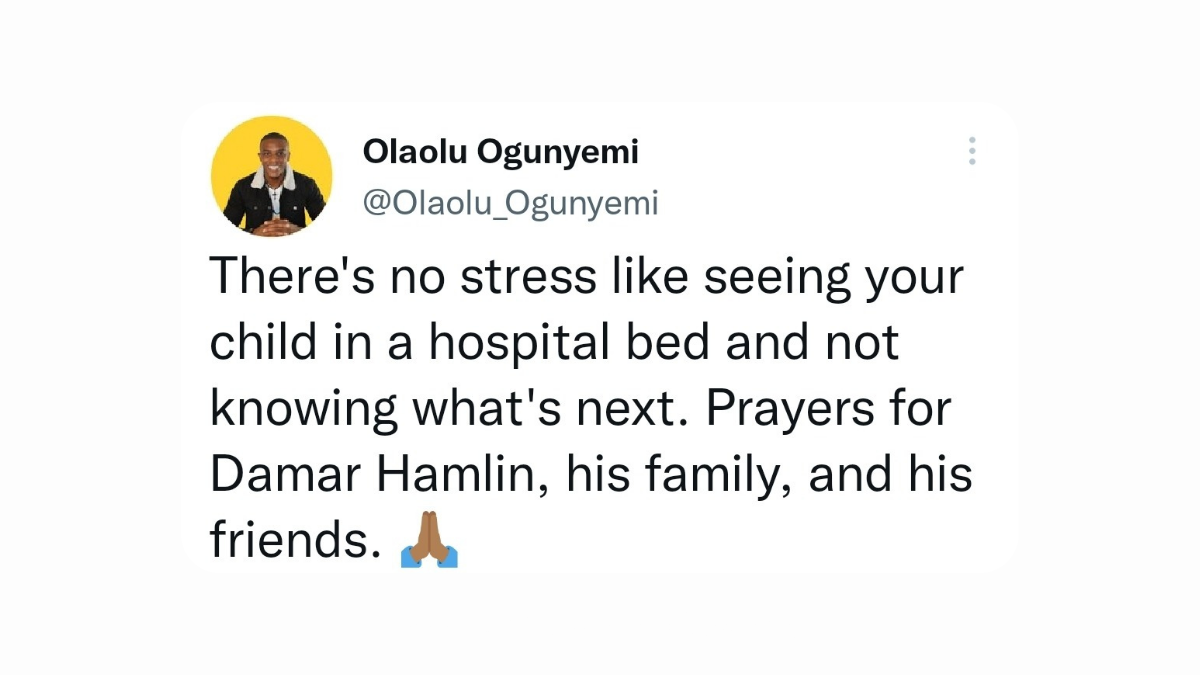 Last night, I joined millions of other football fans as we excitedly prepared for one of the most exciting games of the week. Both teams were already giving fans a show in the first few minutes of the game until Damar Hamlin was injured in the most horrific way. CNN has the backstory and is providing updates.

Why this injury and other serious injuries hit home for me.

Serious injuries like Damar Hamlin’s or Tua Tagovailoa’s concussion a few months ago always make me pause to pray for these human beings who are so talented that they have earned the right to exercise their gifts at the highest level. I also pause to pray for the parents, families, and friends who have to sometimes helplessly see their child in his or her most vulnerable state. Although I would never claim to know exactly how they feel, I relate to the latter group because of my own son.

My son–who is otherwise healthy–was diagnosed with complex-partial epilepsy in 2017. Although he has had episodes in various locations like home, a hotel near Disneyland, and the Dallas/Fort Worth International Airport, I remember his first seizure like it was yesterday. I had uncharacteristically left work extremely early that day and received a call from my wife within five minutes of arriving home. She was distraught, and I could tell something was wrong. I initially thought she had a vehicle accident, so I said, “Take a deep breath baby. Where are you? I’m on the way.” Then she said, “they said he won’t wake up.”

“Who won’t wake up?” I asked. Her next words caused my world to stop, “your son.” It’s almost like my mind couldn’t comprehend the words she was saying for a moment. Then, I finally responded as calmly as I could, “I just walked in the door. I’ll be at the school in less than five minutes… I’ll keep you updated.” The preschool he attended was less than half a mile away, so I arrived fairly quickly and a teacher waved me in. Not knowing what to expect, I rushed in trying to be as calm and levelheaded as possible. One teacher was already beside him taking notes, recording for the EMT, and back briefing me on what had already happened. It’s important to note that the teachers and staff at East County Christian Pre-School in Santee, CA had recently completed training for this exact scenario, so they were professional and well-prepared.

I knelt beside him as he remained unresponsive; his eyes were rolled back and he had what I can only describe as an uncontrolable twitch on one side of his body. For a moment, I just knelt there watching–unsure what to do. The director came behind me and calmly said, “Talk to him. He may be able to hear you even if he’s unresponsive.” She explained this is something she does with her mother when she has a seizure. I obliged until the ambulance arrived soon after. For whatever reason I was unable to ride in the back with my son, so I rode in the passenger seat beside the driver.

A silent ride was the beginning of a stressful few months.

The ride was silent at first as I seared anytime someone was slow to move out of our way. Finally, the driver–a U.S. Army veteran– broke the silence and talked to me until I calmed down. After arriving and processing through the emergency room, the emergency room staff determined this was a febrile seizure. This was the beginning of a years-long journey as my son was officially diagnosed with complex-partial epilepsy a few months later.

With this diagnosis came numerous sleepless nights. My wife and I stared at the baby monitor in his room in hopes that we would hear or see any early signs of a seizure for months. Our visits with neurologists were and have been fairly fruitless as they have been unable to identify a neurological cause. This uncertainty has oftentimes made us feel helpless as we’ve witness a breakthrough seizure.

We have felt helpless but not hopeless.

Similar to what we’ve witnessed with Damar Hamlin, our inability to change the circumstance can make us feel helpless. However, we join millions of parents, family members, and friends who remain hopeful that everything will turn out just fine. Our hope is based upon our faith that God, because we believe He can and will heal. Although my son continues to take anticonvulsant medication daily, he hasn’t had a major breakout seizure in over two years. We continue to pray for his healing!

We pray for Damar Hamlin, his parents, his family, and his friends with that same faith that God will heal. Ultimately, we remain hopeful for great news!

1 thought on “Prayers for Damar Hamlin: We may feel helpless, but we’re not hopeless.”