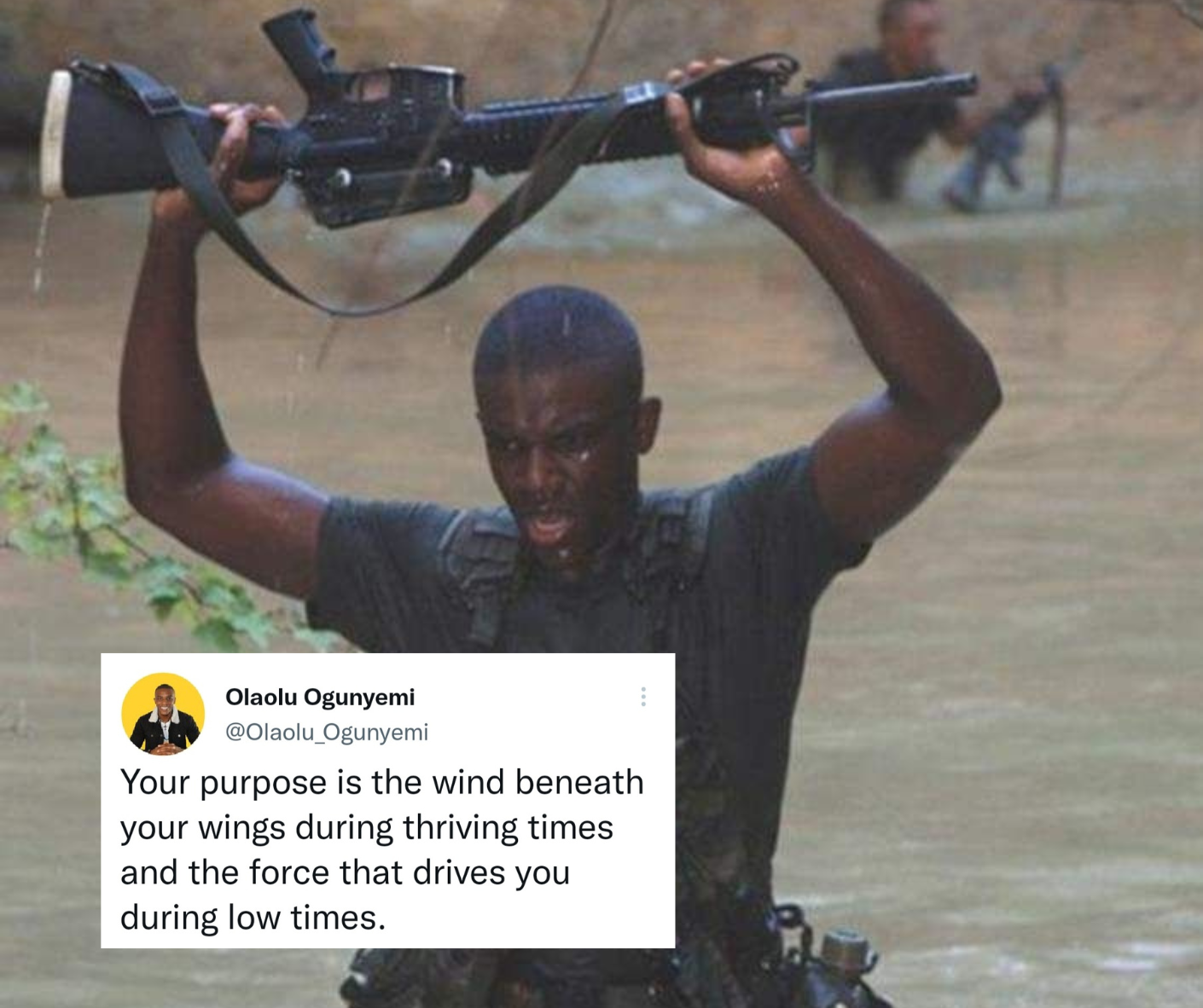 On the go? Learn about your purpose on the go with the below audio version!

So there you are; you just implemented an amazing idea! You finally conquered that initial mountain of “what ifs” and persevered through the shadowy valley of self-doubt and second guessing. Even so, you find yourself thinking, “where do I go from here?” You climbed to a new height only to be met by a second wave of doubt. You begin to question yourself, your purpose, and sometimes, your God. Haven’t we all been there? I know I have. I finally pushed past the nervousness of “what will people think” to be met head on by what seems to be another mountain! If that’s you, let me first start off with a quick encouraging word:

So let’s not get tired of doing what is good. At just the right time we will reap a harvest of blessings if we don’t give up.

This topic reminds me of a slightly younger Olaolu in 2010-2011. Although several of my mentors were U.S. Army veterans, I decided to join the United States Marine Corps! I literally had no clue what that meant. In fact, I often tell people that the only two Marines I knew before I joined were Major Payne and Gunny Ermey! After I met my recruiter, I watched a couple more movies like “Jarhead” so I can learn and understand the jargon. Clearly, I had no idea what I was actually signing up for or why I was signing up, but I felt the urge to serve specifically in the Marine Corps.

Although I was already an adult (at least legally) and in college, I knew my first obstacle would be to convince my parents and siblings that this was a great idea for me. The military was considered a “last resort” for many in my hometown. That is probably because it really was the “last resort” for several veterans in my area as a judge was willing to place them in prison as an alternative. This was going to be a tough sale.

Many are the plans in the mind of a man, but it is the purpose of the Lord that will stand.

“Alright Olaolu, just go to them and tell them, ‘I’m joining the Marine Corps. I’m not asking for your opinion or approval. It’s happening.” I was psyching myself up knowing I wouldn’t take that tone with my parents in a million years. “Just tell them you’re grown and this is what’s best for your life,” I continued.

Of course when the day arrived, my tone was completely unaggressive. I explained to both of my parents that I felt called to serve in this way and reassured them that I would finish college. I was already a Sophomore preparing to head into my Junior year of college, so I felt I could easily afford to take a semester off to attend boot camp and still graduate within four years. Surprisingly, this was pretty uneventful. My parents listened to my idea and calmly asked a few questions to which I responded with very generic answers I previously found on the internet. I later found out they were just putting on a front, but that’s a story for another day. I overcame obstacle number one: convincing my parents this was actually a good idea.

Fast forward a few months, my secretive and ridiculous plan to become an infantryman, serve in combat, train recruits as a drill instructor, graduate college, and commission as an officer within 4 years all came to a screeching halt; something was wrong with my package which prevented me from going to boot camp week after week. Soon, I received a call from an Officer Selection Officer who eventually convinced me to go directly to Officer Candidates School (OCS) through the Platoon Leaders Course-combined program.

After constant preparation like training in some old Army boots one of my mentors let me borrow, cleaning up my diet, and waking up before 5 A.M., I felt I was ready!

The heart of man plans his way, but the Lord establishes his steps.

When I arrived at OCS, I knew I was not the strongest or the fastest, but boy was I confident. I ran a fairly average initial physical fitness test but came in well under the maximum twenty-four minute three mile time. As a person who absolutely abhorred any running beyond the 400 meter dash, I felt like I could conquer the world. There as even a cameraman snapping a picture as I sprinted towards the finish line. I later found out they posted that picture on the OCS website. I found out in a letter from my dad who was congratulating me on finishing ahead of my peers. Little did he know, I was actually “leading” the back third. Regardless, nobody could tell me I wasn’t the greatest runner of all time.

I took this same confidence to one of the first physical training events. The platoon commander led us on a familiarization run where he would show us the trails we’d be training on–a perfect opportunity to show off my impeccable, newly found running skills.

The run started off at a brisk pace, but not too fast or unbearable. After about ten minutes, I started to think, “man you are really prepared! This can’t be what all those people were whining about on YouTube.” Soon after, we started to encounter a few hills–nothing extreme but enough to fire up the quadriceps, calf muscles, and glutes. Then we approached what appeared to be a mountain. Uh oh, I didn’t see that coming. The platoon commander paused at the bottom and said, “this is Da Nang Hill. Let’s go.”

We started a slower pace up this “hill.” I put my head down to watch only the feet of the person in front of me. If they slowed down, I would run around them. Pretty soon I found myself looking at my platoon commander’s heels. I kept pushing; although, I was winded and my legs were on fire. “Don’t look weak in front of these folks. This is what you trained for,” I thought. After running for what felt like forever, I felt it was time to look up to check progress. I immediately got excited after a quick glance. “We’re almost there! Keep pushing yourself!” I whispered to myself. At least I think it was a whisper.

“A few more steps, and we are at the t…” My thoughts were interrupted. I learned my first lesson about running mountainous trails–or “hilly trails” as these new psychos called it–false peaks are real! The trail turned and continued to elevate at what I thought was the summit! I felt like someone hopped out of the brush and smacked me in the chest with a fifty pound sandbag. Then I noticed the platoon commander’s heels were getting further and further away from me. A few seconds later, a couple more heels pass by. Then a couple more. That’s when it hit me, “you’re walking!”

My embarrassment engulfed me. I couldn’t believe that I broke my one rule: don’t walk. I wanted to start running again, but my legs were sending a clear message back to my brain that sounded like, “pssh. Yeah right!” When we made it to the top, I was once again leading the back third. This time, I learned the name of the motley crew I was leading–the stragglers. I was embarrassed, physically tired, and deflated. Although I had made it to the top of Da Nang Hill, I was in an emotional valley.

For I know the plans I have for you, declares the Lord, plans for welfare and not for evil, to give you a future and a hope.

As I reflect on that story, I realize there are so many parallels to life. We prepare, affirm ourselves, set boundaries, and chase after our eternal purpose only to be met by what appears to be a repetitive cycle of rolling hills and false peaks. Regardless of what we have accomplished and our acceptance that God has great plans for our future, we find ourselves discouraged and doubtful of our worth and purpose.

First of all, it’s ok to feel doubt. There are numerous examples of great leaders in the Bible who felt doubt–from Moses to Ruth to the Son of God himself. Each of those moments were profound, and you can easily find countless sermons about their most prolific moments of doubt. However, each of those biblical leaders had one thing in common; they realized that God exists in the past, present, and future outside of our natural timeline…and so should we.

He has made everything beautiful in its time. Also, he has put eternity into man’s heart, yet so that he cannot find out what God has done from the beginning to the end.

I admit, this sounds a bit Star Trek-ish or like something you’d hear from the infamous villain Thanos. This is where our natural understanding falls short and our faith begins. This is why we accept many scientific discoveries as theories instead of fact. Even one of the most notorious scientists ever–Albert Einstein–believed the universe is infinite and that there is an indefinitely superior God. Where we differ is in our belief that the infinite (past, present, and future) God created each of us and placed an eternal purpose in our hearts.

I believe the more we grow our relationship with God, the more we grow beyond our natural limitations so we can see the world from His point of view. I was able to overcome my Da Nang Hill experience–and several other emotional valleys–by realizing that though the setbacks hurt in the moment, they had very little to do with my immediate purpose which was to graduate OCS and they gave credence to my eternal purpose which is to inspire others to overcome their own emotional valleys and pursue their purpose.

As I was writing this, I received a call from a young lady who was distraught. She was conflicted about receiving the COVID-19 vaccine, and after her religious exemption request and subsequent appeal were both denied, she was faced with being separated from the military. She was having her own proverbial Da Nang Hill experience–she felt she was being punished for standing up for what she believed to be right. What’s worse is she would have to face her colleagues who watched her “lose” her fight.

For privacy, I will not discuss any more of her details, but I will share the advice I gave her. I started by reaffirming that I believe we follow orders unless they are unethical, immoral, or illegal, something she already knew. But then, I shared my personal belief and explained how I make decisions:

In the end, I love to leave people like this young lady with one of my favorite scriptures:

Therefore, since we are surrounded by such a huge crowd of witnesses to the life of faith, let us strip off every weight that slows us down, especially the sin that so easily trips us up. And let us run with endurance the race God has set before us.

Stay focused my friends! You will make it through your “Da Nang Hill” experience and come out more refined than before as you live out your God-given purpose.